This is the story of the growth, development and urbanization of Alki or, as some call it, Alki Point.  At first, the land speculators seeking fortune called it New York Alki.  When they realized their get rich quick scheme was doomed to failure they shortened it to Alki and soon relocated to what would become the Seattle, Washington central business district, the hub of a metropolitan area of 3 million persons.

As Seattle’s founding neighborhood, current Alki residents feel that they got the better end of the land speculation bust.

The Alki story features intrepid Native American hunters, fishers, and campers, land speculators seeking riches dressed in the garb of fulfillment of America’s Manifest Destiny, land speculators or, more kindly, investors who made no pretenses otherwise, farmers, loggers, socialites, home keepers, undeservedly well respected bankers who looted their bank at depositors’ expense, military officers who carried out a program of Native American internment and summary execution, machinists, an eldest son ne’er-do-well, restaurateurs, radio operators, electricians, a founder of a failed medical school, a physician who never practiced medicine and a three generation immigrant family, led by the family matron, who saw real estate as the pathway to success and upward mobility.  Native Americans and other people of color were excluded from the process of Alki exploitation or development (reader’s choice of perspective is encouraged). Women, even though they inherited the land from their fathers and mothers, were largely relegated to the background in favor of their husbands and brothers in law. 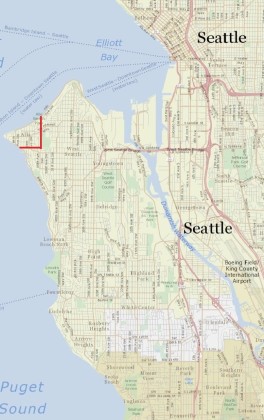 The Peninsula’s farthest north point north is called Duwamish Head and marks the entrance to the Duwamish Waterway to the south and Elliott Bay to the east.  Alki is indicated in the map to the right by red boundary lines and is that part of the Peninsula west of 55th Avenue SW and a projected line until its intersection with SW Spokane Street, all within the City of Seattle.  Alki Point is the Peninsula’s farthest west point.[1]  From Alki one can observe the comings and goings of global shipping and trade of the Seattle and Tacoma, Washington ports, the Washington State Ferries and a large number of recreational sailors, boaters, kayakers, swimmers and fishers.

The dominate Alki feature is its beach and coast line.  Alki is hemmed in on the east and south by steep slopes hindering access to the beach and coast and neighboring plains (see topographical map below. Bold black lines indicate Alki neighborhood boarders). 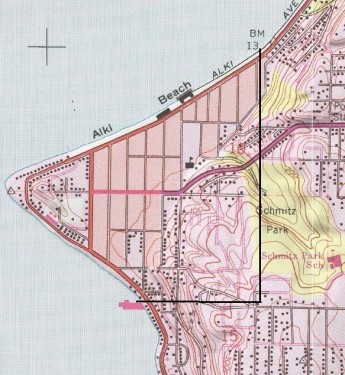 Only when Alki’s inaccessibility was overcome in 1905-07 did Alki become an integral part of the growing and established Seattle community. The industrial age’s growing urban prosperity made possible demand for Alki’s recreational resources and enabled the accumulation of mass leisure time necessary to access these recreational resources. Development in Alki’s east and south came much later than that along the beach and coastline.

Contemporary Alki is a residential community that still hosts waterfront and recreational visitors.  A small commercial strip caters to the visiting community as it has for the last century.  Few of the strip’s business offerings seek to serve the surrounding residential community.  All told Alki measures 280 acres in size or about four tenths of a square mile.  Nearly 4,000 persons call it home.

Depending upon one’s ethnocentric perspective, the Alki story begins with: